This week we're back with Part 2 of my conversation with Philip Su. If you missed last week's newsletter, I highly recommend catching up on the details of Philip's journey from burned out nonprofit CEO to Amazon Shipdock associate.

As I mentioned before, Philip has shared his entire experience and his musings on the future of work, robotics, wealth inequality, and burnout via a 10 part podcast called Peak Salvation. I listened to the whole thing and that's what inspired me to reach out to Philip. I've linked to some podcast jump off points to explore at the end.

In Part 2, I want to focus on what Philip learned from his 6 week stint at Amazon about resilience and mental health. As with last time, this is presented in "as told to" form, and draws from my two 60 mins+ interviews with him plus some points he made in his podcasts. Please enjoy!

His Initial Resistance of Therapy

I have seasonal depression which is ironic because I have lived in Seattle since I was 22. And the five years I didn't live here, I lived in London. I finally began to see a therapist probably in my mid to late twenties.

I was quite skeptical and resistant, but after I began seeing someone, I realized that talking to another person could help me think about my own blind spots, as well as to process difficult emotions so that I wouldn't be so much driven or motivated by them.

I think I would have benefited earlier to be honest, but I had a real reluctance to it that I think was rooted in my East Asian upbringing. The collectivistic society sort of mindset: "Hey, you take one for the team. So what, you lost a leg, just limp around with five legs instead of six, that's how the ant colony works".

As a teenager and young adult, I thought emotions were not to be trusted, that they were volatile and that channeling a Spock-like mindset was what would help me succeed. My view then was "Why experience or think about negative things? If you're not going to be able to change the past, you should just look forward and make the future better."

Now in hindsight, I see that a lot of that was a protective mechanism for how I grew up not having examples about how to positively deal with and deescalate emotions. I focus a lot more now on feeling my way into any hard emotion that comes up rather than avoiding it.

The Peak Salvation podcast is a great example of what I was trying to do there. People ask "why did you write so many of those things?" And what I tell people is so much of it was helping me process my own feelings around this stuff. I don't think I would have been able to experience and take away as much positive from it as I did without an opportunity to share it.

As my mood improved week over week, I wondered whether the emotional benefits of joining Amazon were only possible because I did not need the job. That was until I met Martin, another associate who joined Amazon for the same reason: because he was depressed and needed to get his butt off the couch.

This was a guy who tried desperately on many days to work up the energy just to sign into his Uber Partner app, much less get off the couch, into a car, and drive — drive people, people who talk, people who complain. A man for whom this job is not a passing whim. My idea of deliberately seeking the most grueling period of an already-unpleasant job was not a just play of the rich, but a common thing.

The Importance of Having Productive Work to Do

Far more importantly, I began feeling better even starting Day One, because at last, after so many months, something might change. As the excitement of the novelty wore off over weeks, I was relieved to find that the benefits of the work didn’t. Days when I worked would never be thought of as wasted.

Sure, I wasn’t convinced that my tiny drop of effort was noticeable within the deluge of the cardboard pipeline Amazon had built connecting factories in China directly to American porches, but six tons of boxes is six tons of boxes. Compared to sitting on a couch and occasionally driving out to buy bubble tea, days at Amazon definitely felt more purposeful, even despite some reservations about consumerism and my employer.

The Gift of One's Labor

Making $18.55 an hour made bringing home takeout so much more rewarding. Watching my kids dive ravenously into the Red Robin bag, each finding their own burger orders, chattering with anticipation — I felt the joy in giving something that really cost me something.

Before, I largely ignored prices when ordering out; my concerns were more around whether the kids might take our many comforts for granted and not strive to earn their own. But while at Amazon I got to think to myself “I scanned and moved 4,800 pounds of boxes for these burgers. I sorted 6,000 flat packages for this meal.”

By facing the reality of what will soon become the most commonly held job in America, I wouldn’t go as far as to say I was happy, though I was certainly no longer depressed. But things definitely felt a lot realer. Days were not spent worrying about whether I was too old for tech, wondering whether I could even hold a job anymore without collapsing into my depression and giving up.

Instead, my days were real. Time was real: first, the urgent need to be somewhere or else; then the realization upon accidentally glancing at your watch that it wasn’t even 7:15 yet, that morning break was still two hours away and you had only worked forty-five minutes so far. The work of your hands, the pleasure of rest, the relishing of food: it was all real. And real saved me from the world of the abstract navel-gazing that I was trapped in, a “man of leisure” revealed to be more a “man of purposelessness” or a “man of loneliness.”

Maybe Every Tech Worker Should Spend Some Time Here

I am not going to bill an Amazon job as some sort of upper-middle-class panacea, something you go do just like you go enroll in survivalist camps or silent retreats. The job can be dehumanizing, physically wearing if not outright painful, and mind-numbingly boring if you can’t invent little games for yourself while lifting 300 boxes an hour for eleven hours straight. The job has been incredibly rewarding to me, far beyond what I had expected. It saved me from a downward spiral that I just could not get myself out of. But it’s no dream job. I want out of there as soon as Peak ends; I do not want to stay a minute longer.

If I had it my way, tech workers wouldn’t take sabbaticals just to climb Machu Picchu or see Antarctica — some subset of them, the set for whom the malaise I’m describing resonates, would instead take their sabbatical at an Amazon warehouse.

You may choose to return to your way of life, your tech job with its free food, emphasis on continual self-improvement and life hacks, and relentless pursuit of “making a difference” or “having an impact.” But in returning, you will have willingly done so, actively made the choice to return to that life. You will see many inconveniences and difficulties in a new light. The food will taste better. The meeting, no matter how boring, is at least seated.

If you enjoyed this piece from Philip, you will probably really like his podcast. He examines many of these topics in more detail and depth and his voice is really nice:

🙏
Thank you for being a member of Cultivating Resilience. This newsletter has spread almost exclusively by word of mouth. Would you help share it with a friend or two who might also enjoy it?

Working with an executive coach can help you take on bigger and bolder opportunities in a volatile environment—without destroying your sense of self. I currently have 1-2 open slots for new clients so if that sounds interesting, take a look. 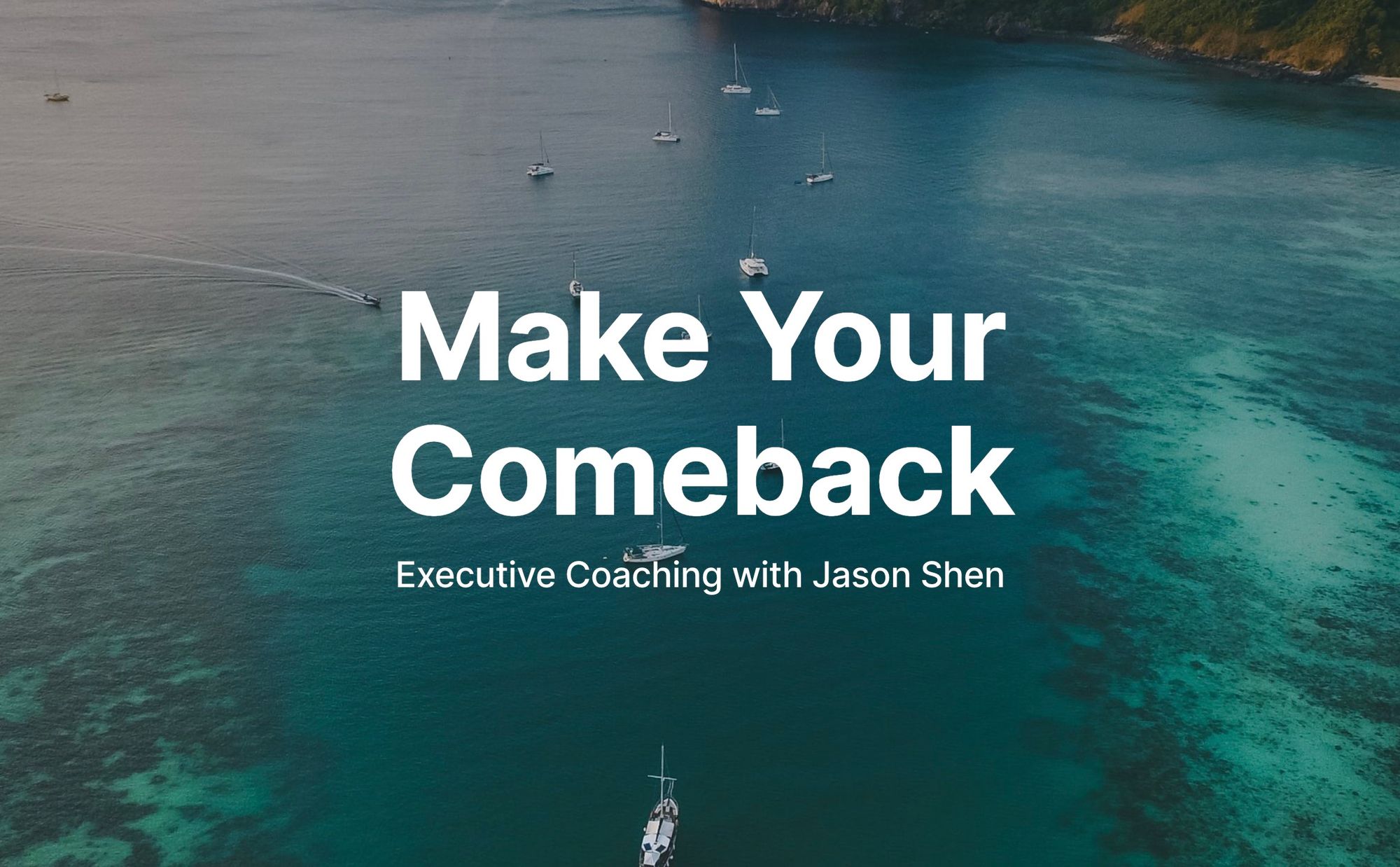 I partner with entrepreneurial leaders to beat burnout, navigate change, and ship work that matters.

Founder, exec coach, and product leader help people foster the conviction to take bold leaps in their work and life—so they can get closer to what really matters.

Join the newsletter to receive the latest updates in your inbox.