Herbert Lui has a book out with Holloway Books called Creative Doing: 75 Practical Exercises to Unblock Your Creative Potential in Your Work, Hobby, or Next Career.

It's a manifesto on pursuing creative work filled with practical wisdom drawn from a diverse array of artists, musicians, filmmakers, writers, business leaders, and fashion designers, plus Lui's own experience as a writer and editor.

The book is slim but dense in the best possible way: every sentence is filled with juicy insights and unexpected connections. Consider this segment where he contrasts Rodin's The Thinker with Luis Vutton menswear artistic director Virgil Abloh around the idea that action generates creative breakthroughs.

The Musée Rodin in Paris exhibits one of 27 known variations of a bronze sculpture entitled Le Penseur—the Thinker—by sculptor Auguste Rodin. The figure is sitting on a rock, hunched over, its hand cradling its chin, and its eyes staring at the ground. Such is the archetypal image of the thinker, which has influenced how we imagine any form of thought, including creative thinking. A modern image of the thinker would still split up the act of engaging our intellectual abilities from movement and senses, though probably in a more luxurious post—say, in an expensive ergonomic swivel chair, or lying down on a chesterfield sofa.

What this image doesn’t express is the fact that we actually learn and process thought while we move and take action. Action generates creative breakthroughs. One person who embodied this insight worked just across from Le Penseur at the Musée Rodin, on the other side of the Seine, at the head offices of Louis Vuitton. He wouldn’t often be caught sitting and staring at the ground; for many years, he didn’t even have a desk at his own office.

The late Virgil Abloh started his fashion career not by sitting around thinking about fashion, but by visiting a screen-printing shop and printing a design he made with Adobe Illustrator on a T-shirt. As his solo work grew more popular (he was previously best known for being creative assistant to Ye, who at the time went by Kanye West), Abloh said all of the ensuing opportunities came “from a moment that happened four years earlier in which I took an idea and got it made.” This comment was prescient; several years after he got the T-shirt printed and completed many more creative projects, Louis Vuitton would appoint Virgil Abloh to be its artistic director of menswear. Abloh’s brand Off-White would break through mainstream culture and get acquired by Louis Vuitton’s parent company LVMH.

Along with my friend NYTimes published journalist and program manager extraordinaire Elisa Mala, I'm tweeting one exercise/idea/rule a day and trying to apply it to my tweets. Elisa's doing it with Instax photos.

Already some interesting things have come out of this challenge, including this tweet that got some decent engagement, which came from my following the "Say Yes" prompt from Day 6 and quote-tweeting the first question I saw on my timeline.

Am curious to see how the next 68 days go on this one. 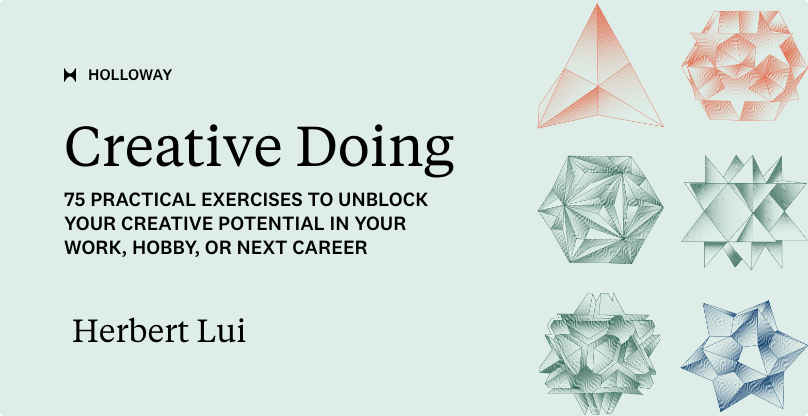 Creative Doing: 75 Practical Exercises to Unblock Your Creative Potential in Your Work, Hobby, or Next Career

Creative Doing is a slim, inspired volume that deserves space on the shelf of every person who seeks to work in a creative manner. Centered around 75 creative invitations, Lui draws inspiration from fashion (Vutton, Virgil), business (Patagonia, Y Combinator), hip hop (Kanye, DJ Kool Herc), film (Tommy Wiseau, Will Smith), writing (Allen Ginsberg, Mason Currey), and fine art (Van Gogh, Rodin), plus a sprinkling of comedians, academics, and philosophers as well as his own experience as a veteran writer. The result is a delightful book filled at every turn with new ideas, fascinating stories, and intriguing ways of evolving your creative practice. I’ve had a chance to know Lui personally and this book is as he is: smart, generous, and unceasingly helpful.

Join the newsletter to receive the latest updates in your inbox.